Quote and Saying about life

I always thought that when people said “everything is not as it seems” it was always a bad thing. Until I met her. She was beautiful from the start, hair soft and eyes bright. She was shy at first, looking at the ground smiling lightly whenever offered a compliment or a dance. She had the attention of many despite finding comfort in the shadows of the bar. There was an aura about her. The way her dress rippled over her every time she laughed. The way her shoes bumped against the side of the chair as she swung her legs back and forth. The way her piercing caught the light every time she wrinkled her nose. I couldn’t look away, but I couldn’t look either. She was enticing but dangerous and I brushed it off as the alcohol.

Until she was in the internet cafe downtown and I felt my palms clench so tightly my nails almost drew blood. She was typing quickly so I told myself she was doing something important. A weak excuse to leave without approaching. But not without noticing the way she bit her lip as she concentrated. Or the way her jeans frayed at the ends and hovered just above the floor. Or the way she drank her coffee with no hesitation.

It was when we sat next to each other on the bus that I decided I had to take a chance and say hello. Fate was only giving me one last chance I came to think as my heart pounded so hard inside my chest I thought I might collapse. As I stumbled over my words she let her eyes slide to the floor and laughed quietly. As I told her stories of my childhood she pressed her chin into her palm and listened as if I was sharing the best secret she’d ever heard. As I typed my number into her phone she sat on both her hands and smiled. As I got off the stop before her, she pressed her nose against the window and waved goodbye like a little kid. And as I walked home I realised she was far more dangerous than I had ever imagined.

I found myself sat across from her a few days later in her favourite burger joint, oil dripping down both of our cheeks. When we laughed in unison it felt timeless. When we linked fingers on the table it felt like magic. When we kissed on her doorstep at the end of the night it felt like home.

She was a firework waiting to explode. You know that when it does it will be spectacular, but you don’t know what it will look like until it happens. I knew she would take my breath away as soon as I saw her, but I didn’t know just how breathless I would feel. She is more than you could expect and nothing you thought you ever needed.

So when someone says to me that everything is not as it seems, I would have to agree. She is far more than a label of a relationship or a partner. She is the warmth that some crave their entire life but never find. Her soul is the missing puzzle piece in my mind. She is danger. She is beauty. And she is home. 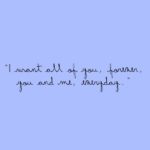